What is aspect ratio in CS:GO?

When you watch the professionals play on stage and you see their monitors. You might notice that most of them are playing 4:3, which means they have black bars on the sides. The reason for this is that the majority of the players started their career in counter-strike 1.6, where all monitors were quadratic (4:3). Since they have spent so many hours with that resolution some find it easier to keep it, than adapting to a new
resolution. While others choose to play with black bars because it’s less “noise” that they need to pay attention too. Every resolution has an advantage but with every advantage comes a disadvantage. If you have been known to Counter-Strike for a while, you might have come across people talking about 4:3 stretched.

When playing with 4:3 resolution, you will get a quadratic view of the game and have black bars on the sides of your screen. This resolution takes away a lot of your field view and will make it harder to notice someone sneaking up on you from the side. But it can also make it easier to concentrate on the center of the screen and be more focused on what is happening in front of you. Besides the visual impact of this resolution, some people also prefer to play with 4:3, because it gives you slightly more FPS (Frames Pr. Second), which allows your game to run more smooth 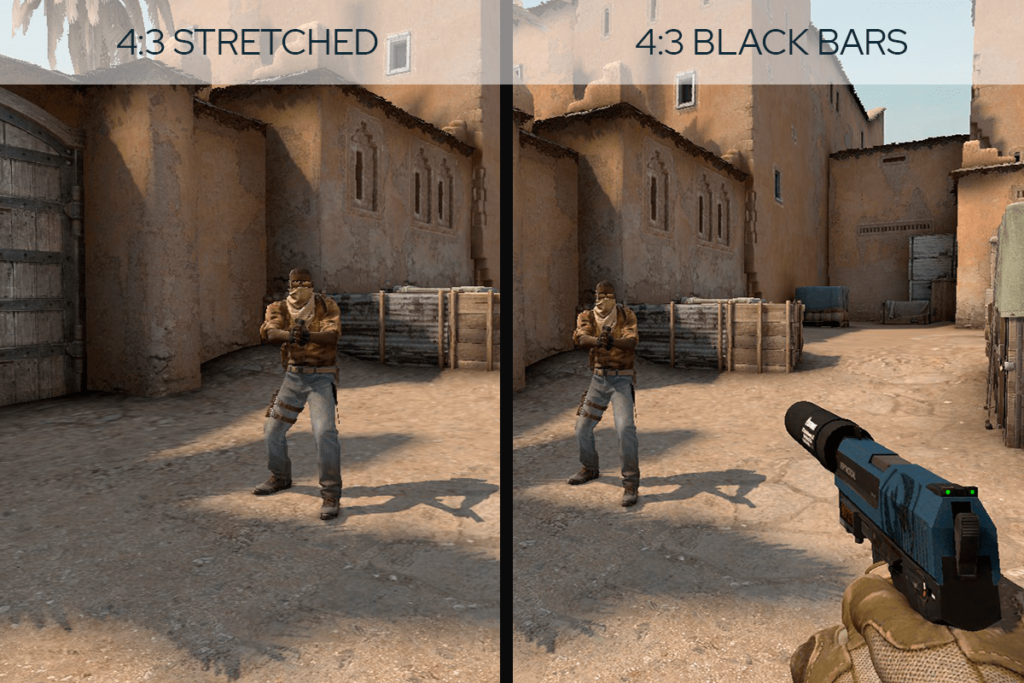 4:3 stretched aspect ratio has the same field of view as 4:3 aspect ratio. The view is simply stretched to the sides and gives the image a wider look. This makes the players appear fatter and small gaps appear wider. This does not mean the players are easier to hit, but it does give you a small visual advantage, as the players will be easier to spot. If you change your resolution to stretched, you will notice that your crosshair movement might feel a bit weird. This is because the width appears wider than it actually is. Therefore your crosshair will seem to move faster horizontally than vertically. But as with everything else in Counter-Strike, it only takes some practice to get used to. When choosing the stretched resolution you should also be wary of the enemies peeking feeling faster. If you are new to CS:GO you might not know what “peeking” refers to, but don’t worry we will get into that later.

The 16:9 aspect ratio is your native resolution which you will be given by default when playing the game for the first time. My best advice when it comes to resolutions is to stick with the one you have. Don’t change because a pro player hit a good shot with a different resolution to yours. The picture beneath gives you an illustration of the real difference between stretched and native resolution.

Finding the right monitor settings is just as hard as finding the right mouse sensitivity since there is no “right” or “wrong”. It is once again a preference choice to make. But there are some settings that will give you an advantage in a couple of ways.

We use cookies on our website to give you the most relevant experience. By clicking “Accept All”, you consent to the use of ALL the cookies. However, you may visit "Cookie Settings" to provide a controlled consent.
Cookie SettingsAccept All
Manage consent

This website uses cookies to improve your experience while you navigate through the website. Out of these, the cookies that are categorized as necessary are stored on your browser as they are essential for the working of basic functionalities of the website. We also use third-party cookies that help us analyze and understand how you use this website. These cookies will be stored in your browser only with your consent. You also have the option to opt-out of these cookies. But opting out of some of these cookies may affect your browsing experience.
Necessary Always Enabled
Necessary cookies are absolutely essential for the website to function properly. These cookies ensure basic functionalities and security features of the website, anonymously.
Functional
Functional cookies help to perform certain functionalities like sharing the content of the website on social media platforms, collect feedbacks, and other third-party features.
Performance
Performance cookies are used to understand and analyze the key performance indexes of the website which helps in delivering a better user experience for the visitors.
Analytics
Analytical cookies are used to understand how visitors interact with the website. These cookies help provide information on metrics the number of visitors, bounce rate, traffic source, etc.
Advertisement
Advertisement cookies are used to provide visitors with relevant ads and marketing campaigns. These cookies track visitors across websites and collect information to provide customized ads.
Others
Other uncategorized cookies are those that are being analyzed and have not been classified into a category as yet.
SAVE & ACCEPT