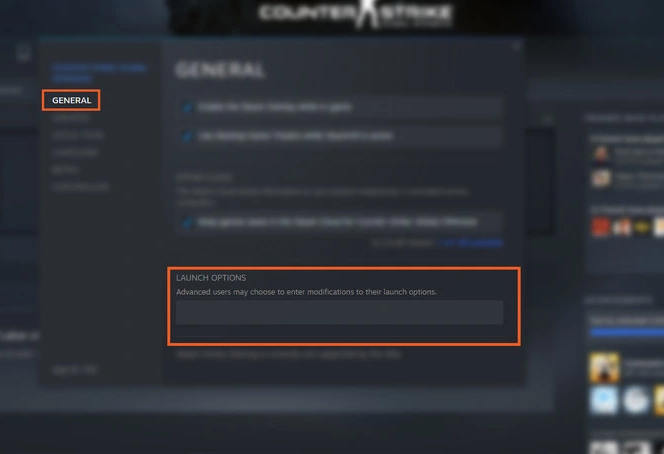 The best launch options for CS:GO in 2021

Generally speaking, the launch options won’t help your frame rates much, so if you are looking for ways to improve your frame rates then I recommend you to head over to our FPS boost guide for CS:GO, where we provide troubleshooting, methods, and more.

Full description of the best launch options for CS:GO

If you are looking for the best launch options on the market for Counter-Strike: Global Offensive then you’ve come to the right place. In the table above are the best settings and they have been tested and analyzed for the best result. Let’s go through each and every one of the top launch settings so that you can get the best understanding of what they are and what they do.
Novid:

By default, the game has a set intro video for the game that plays on your screen every time you launch the game. So if you haven’t had this command in your launch options then you know exactly what intro video I’m talking about. It’s the bald guy with the valve build into the back of his head, of course. There’s nothing wrong with video game intros as they can create some immersion or give some well-deserved credit to the developer. But when you are playing a game like Counter-Strike: Global Offensive then you’ll find yourself looking at that intro every single day and most likely multiple times a day. So it becomes quite annoying in the long run, doesn’t it?

With this command in your launch options, you’ll quickly wish you had done it earlier as it makes your launch time much faster. The command simply removes the whole intro from the game. If you have an old or slow computer and you have a limited time to join a game then this command can be a lifesaver!

All Valve’s official servers run on 64 tick rates and so does your own private/offline servers. Luckily you can actually decide the tick rate of the servers you make yourself, such as the offline workshop maps or private hosted servers. By using this command all the servers you create on your own will automatically be played at 128 tick rate.

If you only play on Valve’s official servers such as Matchmaking, Wingman, and so on then, you might not be aware of how big a deal 128 tick is. If you on the other hand are used to playing Faceit or ESEA then you know exactly how much nicer 128 tick is compared to 64 tick rated servers. It’s a game-changer! The difference is huge and everything is way more smooth on 128 tick.

This command is one of the more important ones and you need to make sure this matches your data. This setting controls what refresh rate the game should run at and that refresh rate should match the one your monitor runs at. If you don’t know what the Hz/refresh rate is then we will do a very quick explanation because it is important to know.

This specific launch option is one of those that works for some people and others it does nothing at all. So the best way to find out if you are to try it out and check your framerates for improvements.

This command tells your computer that CS:GO is a high-priority task when opened on your computer. Most computers already know that games and open programs always should be run as a high priority but for some, this command can help immensely on your frame rates.

As it even states in the name it forces CS:GO to preload the game details before you play it. If you happen to experience stuttering or low FPS when you play CS:GO then this command can be your solution. Instead of loading all the game details as you are playing then it will load them in advance while you are loading a map. It might make the load time between maps slower but it can be worth it if you want your FPS to increase.

If you do not see any improvements after adding this command to your launch options then you can remove it again and keep your commands to a minimum.

adding “-nod3d9ex” to your launch options is one of many methods to make your game close/open faster when pressing “alt-tab”. Unless you always stay 100% focused on the game then you probably minimize the game in between rounds to kill time or do other tasks. This command simply tries to shorten the amount of time it takes to minimize and open the game.

nojoy removes the game’s ability to support a controller/joystick. You might think that’s a silly command to add but it has been shown to increase the performance of the game a tiny bit for some players. And unless playing with a joystick is your only option then I can’t see a situation where you would need a joystick to play Counter-Strike.

This is the most important command to have added to your launch options if you have a personal autoexec file. Most players these days have created their own autoexec file to personalize their game settings and to improve cetain aspects of the game. This command makes sure that the game reads that file and applies your settings to the game. If you do not know what an autoexec file is then you can read all about autoexec and config files in CS:GO here.

Thank you for reading and taking interest. If you wan’t to become a better CS:GO player then head over to our CS:GO guide.

We use cookies on our website to give you the most relevant experience. By clicking “Accept All”, you consent to the use of ALL the cookies. However, you may visit "Cookie Settings" to provide a controlled consent.
Cookie SettingsAccept All
Manage consent

This website uses cookies to improve your experience while you navigate through the website. Out of these, the cookies that are categorized as necessary are stored on your browser as they are essential for the working of basic functionalities of the website. We also use third-party cookies that help us analyze and understand how you use this website. These cookies will be stored in your browser only with your consent. You also have the option to opt-out of these cookies. But opting out of some of these cookies may affect your browsing experience.
Necessary Always Enabled
Necessary cookies are absolutely essential for the website to function properly. These cookies ensure basic functionalities and security features of the website, anonymously.
Functional
Functional cookies help to perform certain functionalities like sharing the content of the website on social media platforms, collect feedbacks, and other third-party features.
Performance
Performance cookies are used to understand and analyze the key performance indexes of the website which helps in delivering a better user experience for the visitors.
Analytics
Analytical cookies are used to understand how visitors interact with the website. These cookies help provide information on metrics the number of visitors, bounce rate, traffic source, etc.
Advertisement
Advertisement cookies are used to provide visitors with relevant ads and marketing campaigns. These cookies track visitors across websites and collect information to provide customized ads.
Others
Other uncategorized cookies are those that are being analyzed and have not been classified into a category as yet.
SAVE & ACCEPT